Home Technology We tested the first smartphone with a "magic" screen from Chinese manufacturer...
Technology 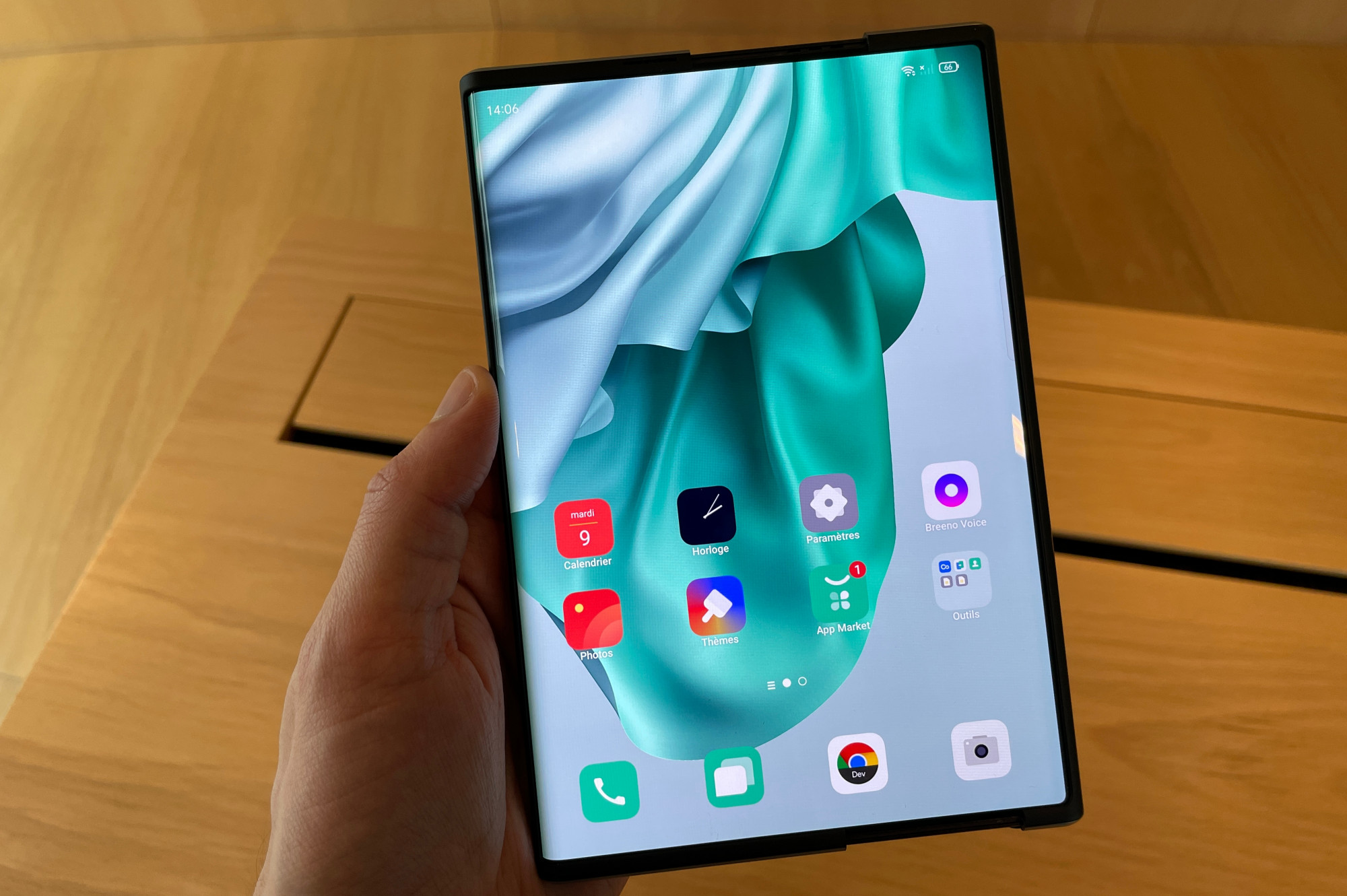 With the push of a button, you get a screen almost as large as a tablet in just three seconds. Chinese manufacturer Oppo is renewing the genre of flexible screen smartphones with a particularly astonishing prototype sliding screen device.

Launched at the end of 2019 by Samsung and Huawei, these ultra sophisticated phones promise the viewing comfort of a tablet for the small footprint of a smartphone thanks to their fold-out screen. But the first models marketed so far are penalized by prohibitive prices, between 1,500 and 2,200 euros, and defects inherent in their design.

Samsung and Huawei have chosen to bet on foldable screens that open and close like a book thanks to a hinge system. But that implies a very noticeable crease in the middle of the screen and increased fragility: these devices are very sensitive to dust and splashes.

Anxious to correct these flaws, the Chinese manufacturer Oppo unveiled last November in China the Oppo X, a prototype smartphone whose screen expands by unfolding in the same way as the canvas of a video projector fixed to a wall. The brand let us handle the device for nearly an hour on Tuesday.

The Oppo X 2021 goes from the size of an imposing 6.7-inch smartphone to that of a small 7.4-inch tablet with a simple press of a button on the edge. The operation takes barely three seconds and gives the phone magic device tunes : the screen unfolds naturally on itself like a sheet of parchment at the same time as its content adapts to its new format in a perfectly fluid fade.

A sliding screen concept phone that claims to correct the flaws of foldable screens: the hallmark of folding and durability.

Techno is not ready to be marketed but @oppomobilefr is hopeful of integrating it into a future product. pic.twitter.com/DjrfVPUGMQ

This technological slap is made possible thanks to a technology resulting from more than a year of research which required the filing of a hundred patents. The screen is moved from left to right by a mechanical system, powered by two mini motorss, of plates that slide together in a movement similar to that of a caterpillar. It is not possible to open or fold it manually.

The technology has been laboratory tested to withstand 100,000 openings and closings, assures Oppo. Which corresponds to about five years of use. Work is underway to double this guarantee. The brand promises that dust cannot get inside the system, which seems hard to believe because the slit where the screen is lodged seems exposed. On the other hand, it is vulnerable to water and splashing because unlike conventional smartphone screens, it is not protected by any filter.

Much work remains to be done on design and software

Oppo highlights the obvious advantages of such a flexible format for the consumption of multimedia content. The screen expands on demand to watch a movie, read an article or reply to an email. This with an almost invisible fold line. It closes in on itself to fit in the pocket or make a call. It doesn’t just get bigger physically: the content is expanding too, even if applications are not yet optimized for this new format. Oppo promises to work in this direction with its COlorOS interface for Android.

for the size of a large classic smartphone

The unrolled screen does not reveal any folds

But the device is generally unsightly: it is still in the prototype stage.


Would we be ready to trade our classic smartphone for a device of this type? It is still a little early to consider it. This smartphone is very imposing, even in the closed position, and weighs a certain weight while remaining fragile. Oppo does not claim to market it immediately. It is a simple prototype, some problems of which have not yet been resolved, in particular the placement of the antennas, the battery and other components which is disturbed by the integration of the sliding mechanism under the screen. This technology should be seen as a promise, which may be integrated into a future smartphone in the future.

On Warzone, the secret nerf of Cold War silencers will be canceled

Fans of Call of Duty: Warzone will be happy to hear that the secret nerve of the Silent Agency season 2 as well...
Read more
Technology

The Golden Ace rewarding the board game of the year was awarded...
Read more
Technology

Final Fantasy VII Remake Intergrade arrives on Playstation and stars Yuffie. Here is all the info on the release date and this new...
Read more
Technology

Apple started selling today Certified refurbished Mac mini models with M1 chip For the first time in the US and Canada at around 15%...
Read more

Death of Uncle David: he had hidden warning signs of his stroke from his relatives

metro B disrupted by works in March

Automation work on line B of the Lyon metro will cause traffic disruptions throughout the month of March. The metro automation work will continue in...
Read more

“I will have no mercy on anyone”